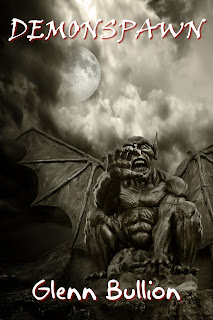 
Alex Teague tries to live a normal life. He’s close with his sister Alicia and best friend Cindy Marshall. He didn't think he was unlike anyone else. That all changed one night during his senior year in high school, when he talked to his first ghost, exorcised his first demon, and cleansed his first haunted house.

If only it ended there.

Now a young man in his twenties, Alex makes a horrifying discovery.

He is part demon.

Victoria, a vampire, takes him under her wing, and teaches him about the world of the supernatural, which Alex is now a member. She discovers a new breed of vampire, one which kills without thought or remorse. She enlists Alex’s help, but will even his growing demonic powers be able to stop them?
What they're saying about it:

"Demonspawn has an interesting take on the paranormal genre. The main character, Alex Teague, is a boy like most others growing up, with just a few instances that might indicate there is something different about him. But as he matures, questions about his heritage cause him to doubt he is really his mother's son. The true story is an interesting take on acquiring "super" powers. Main characters are well developed and the storyline is good. Pacing is OK, just a couple of spots it slows down. Dialogue is good and I like the overall style of the book. Good first entry by this author and I will be looking for more by Glenn Bullion."--Amazon Reviewer

"Demonspawn by Glenn Bullion is just plain great. But, not plain. Just great. I really enjoyed the ease and flow of the story from start to finish. I would encourage everyone who has ever been in love with their best friend and never realized it to read this. Also, anyone who has ever had to deal with their demonic powers should give this a read over as well. Great job, Glenn! I hope you put out more books soon!"--Amazon Reviewer
Posted by Holly Hook at 8:00 PM