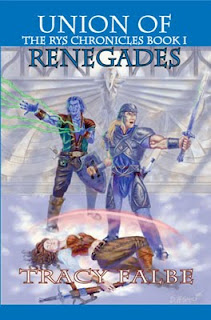 Union of Renegades: The Rys Chronicles Book I by Tracy Falbe


Dreibrand Veta has killed for his country. At the frontlines of imperial expansion, he seeks to rebuild the fortune of his noble family. In his daring travels he encounters the rys, a rare super race far more powerful than the human empire that bred him. Dreibrand cannot defy the rys Queen Onja nor defend his companion, Miranda, and her children from the wicked tyrant Queen. Desperate for help, Dreibrand and Miranda join Shan, a rys with emerging powers who plans to challenge Onja. In Shan’s pursuit of the rys throne, he exerts his magical powers, gathers his allies, and incites rebellion among Onja’s human subjects.

Great wealth and power will reward the kings, warriors, and spies that align themselves with the rys pretender, but defeat could mean worse than death. Onja can imprison souls and her genocidal rage is legendary. Everything is at risk for Shan’s union of renegades.

"I only discovered this book when it was a free download and read it on a whim. I'm glad I did. I must say, that this book was a real location clicker (page turner for non-kindle users...lol). A dishonored warrior and an escaped slave team up with a powerful being from a magical race of "people" and do battle against the queen of the Rys. I just bought the 2nd book, so the publishers free intro book worked to get me hooked on the trilogy."--Amazon Reviewer

"This is a great read with plenty of intrigue, magic, terror, wizardry, spells, and subplots to grip the reader..." -- Crystal Reviews, January 2006